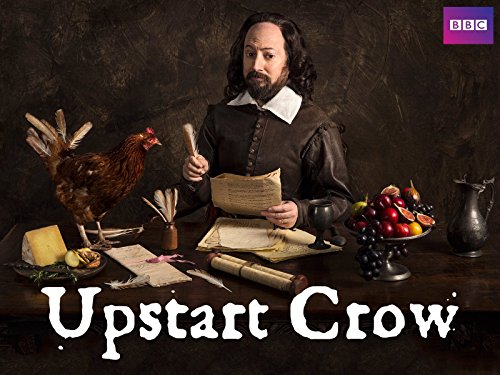 Somehow David Mitchell resembles William Shakespeare a lot. „Upstart Crow“ is the name of the new comedy series on BBC Two, where David Mitchell portraits the Bard before he became famous. Struggling with the London city life and the comfort of the Stratford home, including interrupted or late coach rides between the two, the series brings today’s comforts in a hilarious context of Elizabethean England.

With Ben Elton as creator of the series it’s no wonder it resembles „Blackadder“ somehow. From witty dialogues to the ongoing struggle with words and mimics it gives an amusing view on modern society and the boastful characters Marlowe (Tim Downie) and Green (Mark Heap) are the perfect counterparts to the sometimes out-of-place Will.

Of course the ladies in the show are struggling with their places in the man-made society. Kate (Gemma Whelan), Will’s house maid in London, always tries to pursuade Will to give her a part in his plays. Anne (Liza Tarbuck), Will’s wife, struggles with her parents in-law and her pubertal daughter Susan, which because of her reading skills has to put up with trying out plays in the kitchen.

For Shakespeare lovers this series is definitely something fun to watch, including the taunts on today’s life.